Contribution vs Making a Difference!

“…why do I talk about the benefits of failure? Simply because failure meant a stripping away of the inessential. I stopped pretending to myself that I was anything other than what I was, and began to direct all my energy into finishing the only work that mattered to me. Had I really succeeded at anything else, I might never have found the determination to succeed in the one arena I believed I truly belonged. I was set free, because my greatest fear had been realized, and I was still alive, and I still had a daughter whom I adored, and I had an old typewriter and a big idea. And so rock bottom became the solid foundation on which I rebuilt my life. ~ J.K. Rowling

Having spent some time this weekend in Portland participating in the ritual of sharing 2011 vision boards with two beautiful women friends,  I realized that although I feel like I am on the inside of a cannon about ready to explode in a completely new direction –

that it is the contribution I have to bring in this new direction, place, and creation of relationship that matters most.

As women we often feel that we need to “make a difference” in the world, in our families, in our communities, in our relationships – it goes on and on.  However, might we try on how it feels inside to compare “make a difference” to “make a contribution”.   For me, there is a edge to “make a difference” that is somehow filled with the expectation that we have to do something, and the need to make certain “that something” hits the target that we are aiming at.  It also somehow feels attached to attempting to gain favor or recognition for something – that may or may not be our natural authentic expression.  Feel a little pressure here?

Now there is nothing wrong with challenging ourselves, but how does it feel to simply “contribute” from the still (and sometimes very loud) voice inside that asks you to follow your heart and soul.  To bring that unique expression that is only yours out into the world.  There is a flow that happens  when we reach this place….and a knowing that even if we “fail” in bringing or manifesting our contribution out into the world, that at least we have taken our divine and true nature and given it a voice and a form from which to express.

As J.K. Rowling says in the above quote, when we stop pretending to be other than what and who we are, then we have the energy, passion and commitment to direct into the livelihood/artistic expression/relationships that matters most to us.  We set ourselves free when we contribute from this place of being….and it is here that we thrive.

There are two videos this week that I want to share with you.  The first is of an amazing woman by the name of Jeanne Dowell who is a first-time entrepreneur at the age of 80!  Merging her long-time experience as a yoga teacher, Jeanne, along with her 44 year old daughter, launches a new eco-friendly apparel business – The Green Buddha company.  Jeanne teaches us that it is never too late to contribute and that often, just naturally, that contribution does “make a difference”.

The second video is at the other end of the age spectrum and features an incredibly courageous, articulate, wise, intelligent and beautiful young woman giving a keynote talk on Martin Luther King Day in her high school auditorium.  Kayla’s contribution is saying YES to her fullest self – even when that may present challenges that she might not know how to handle.  Staying silent however, is not an option for this young woman….and her entire school learns a deep and valuable lesson about being authentic, even when it is terrifying and filled with the unknown.

OTHER BLOGS BY GAYE ABBOTT:  BreathingSpaces 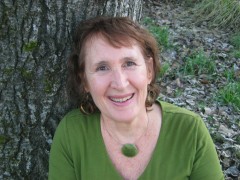